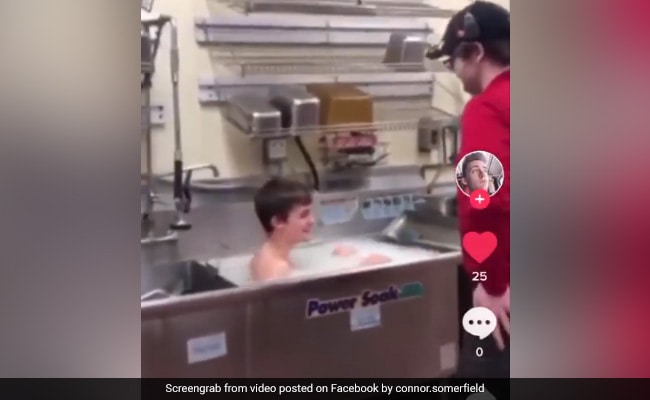 A Wendy’s employee was seen taking a bath in their kitchen sink.

A video of a restaurant employee taking a bath in the kitchen sink went viral shortly after it surfaced online.

According to media reports, the man was an employee at Wendy’s in Michigan, US. Today News reports that he, and other employees, were fired for the stunt. The video was shared on Facebook by Connor Somerfield with the caption, “So yeah I’m just gonna tell everyone right now…Do not go to the Greenville Wendy’s. This is disgusting.”

The video was originally posted on TikTok, then shared on Facebook, where it quickly went viral.

In the video, a man is seen getting in the restaurant’s oversized kitchen sink and another man, wearing a Wendy’s uniform, is seen throwing something into the sink and saying: “Wash yourself!”

“It feels like a hot tub,” the man responds as he scrubs himself in soapy water. “I’m just enjoying life,” he added, as others are heard laughing in the background.

As the video went viral, people questioned the restaurant’s hygiene and flooded the social media with their reactions.

A user wrote, “Wow, I’m sure your parents are so proud of you. Very unprofessional and disrespectful to your customers.”

Another wrote, “Oh it’s real alright, and that is certainly all commercial equipment he’s using and the equipment nearby. However it may not be a real Wendy’s most likely a rival restaurant trying to set Wendy’s up for a fail.”

“I work at a restaurant, Where was the manager? Disgusting, needs to be fired, manager too!!” asked one user.

“The amount of people saying it’s ok will probably find hair in their food and still eat it,” a user said.

(Except for the headline, this story has not been edited by NDTV staff and is published from a syndicated feed.)